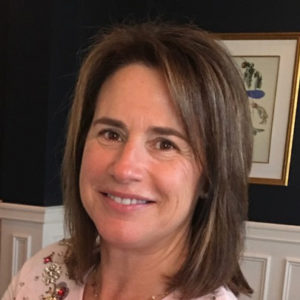 Where do you live?
Manasquan

What do you do for living?
In my first career, I was an assistant vice president at Merrill Lynch. I was also an independent consultant and did design and coding work on Wall Street. Today, I don’t have a 9 to 5 job, but I do hold a certification in holistic health. I’ve coached for many years, working with individuals on how to eat well.

I’ve also battled Lyme Disease and I often get calls from people who’ve been diagnosed and don’t know what to do or how to feel better. There’s a lot of controversy surrounding the disease and many doctors don’t know how to treat it. I don’t want anyone to go through what I went through, so I will help who ever I can!

You’re also involved with the Lyme disease community on a bigger level; can you tell us more about that?
I am actively involved with Global Lyme Alliance. It’s a large non-profit “dedicated to conquering Lyme disease and other tick-borne illnesses through research, education, awareness and patient services.”

I mostly fund-raise for them and chair a “Taste for a Cure” wine-tasting event in Monmouth County, for the last three years. I also attend seminars, meetings and sit in on research symposiums.

How did you first become involved with Impact 100 JC?
I was invited to a recruiting luncheon by a founding member, Paulette Roberts. Deirdre (Spiropoulos, president and co-founder), sat down with six of us and explained the organization. I was so inspired by the wonderful work and I knew immediately I wanted
to be a part of it and I wrote a check right there. That was three years ago.

What inspired you about the organization?
I just believed in the mission. I like the concept of women coming together and helping people in a local community. There’s nothing else out there like it!

When did it dawn on you that Impact was making a difference?
Not until I attended my first annual meeting did I realize there was so much need in our community. What an emotional and inspiring night, especially when the grant applicants were presenting their pitches!

I had no idea Impact was filling such a void!

Being able to say that I am a part of something like this, something so much bigger than myself, and that we can change the course of so many people’s lives — it’s very empowering!

What would you tell a woman who is considering joining?
If you want to be a part of something remarkable, share the experience with other like-minded women, change the lives of people in our area and have a voice in directing where the money goes — join! It’s a pretty compelling argument!

What’s the best life advice you’ve ever received?
I was recently sitting next to a doctor at a seminar and he said, “To stay healthy, you have to stay away from people who bring negativity into your life and don’t respect your friendship. It’s a pure waste of your time and energy!” I agree!

Tell us something about you that not many people know. A fun fact.
I’ve been a golfer for the last 10 years, on and off, and three years ago, I was the women’s club champion at my golf club!

What’s the most recent book you read?
“Let There be Water” by Seth M. Siegel. It’s about the creation of a water system in the desert areas of Israel and how people all take responsibility for its use. It’s an “off the beaten path” read, but it just caught my fascination!

Marilyn Schlossbach: Member in the Moment