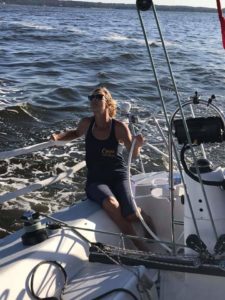 Meet Karen Harris
Many of our members don’t just volunteer their time with us. Some become involved with local non-profits they’re led to through their work at Impact 100 Jersey Coast. This is exactly what happened with Karen Harris. On a site visit to Horizons, an organization offering summer enrichment programs to underprivileged children, she witnessed a joyful scene.

“The kids were so happy and engaged and getting exposed to so many things – building boats, learning to swim, visiting museums,” Harris recalled. “Horizons gives these children experiences they would never have.”

Helping Horizons
Impressed with what she saw, Harris was determined to do something more. So, she introduced Horizon’s director to the president of Christian Brothers Academy (CBA), where her son was a student. Her hope was that the two could forge a connection.

Since then, CBA’s Lincroft campus has become another site for Horizon’s programs and also supplies volunteers. Harris describes this “a beautiful thing that joins two communities together.” Likewise, Harris has donated cruises on her 40-ft sailboat, Cigne, to Horizons during fund-raising campaigns.

Taking Horizon families on cruises, she said, “were some of the best sails I’ve had all year! It was incredible to do that and raise money. The families were just terrific and the kids kept calling me ‘Captain.’

180  Turning Lives Around
Her community involvement doesn’t stop there. For the last ten years, Harris has given her time to 180 Turning Lives Around, Monmouth county’s anti-domestic violence organization and the recipient of Impact 100 JC’s inaugural grant.

The organization hits home. As a survivor of domestic violence who left an abusive marriage 18 years ago, Harris felt it was imperative to empower other women. To demonstrate firsthand that a woman can go on to lead a healthy, fulfilling, violence-free existence.

Interestingly, she reports receiving far fewer crisis calls while volunteering during the pandemic. This bears out with national statistics, which indicate a drop in calls for help, but not necessarily a drop in abuse cases.

“We know this is because they’re stuck in a house with their abuser,” Harris said. “When all this lifts, (the Pandemic) we’ll see a tremendous amount of revelation. It’s been too quiet.”

To clarify, 180’s services are still very much available. While the hospital and police in-person accompaniment have been suspended, survivors will still have the opportunity to connect with an advocate on the phone. Likewise, the hotline is still staffed round the clock. (see details below)

To a woman reading this who may be experiencing domestic or sexual violence, Harris offers these words: “One in four women are victims,” she said. “But remember, It’s not you! It’s the poor choices your perpetrator is making. And there IS help!”

To further benefit 180, Harris will again participate in the 16th annual Ms. Race, an all-women sailing regatta that takes place August 22 and is hosted by the Atlantic Highlands Yacht Club. Not only does the event raise money but also, heightens awareness for women in the sport of sailing, which has traditionally been dominated by men.

“It’s all about empowering women – that’s the common thread,” she added.

Harris lives in Red Bank and owns a recruiting company, Targeted Talent. She has been an Impact member for the last three years.

You can immediately reach 180’s hotlines for 24/7 support as follows:

Marilyn Schlossbach: Member in the Moment

Devin Carrick: Member In The Moment